Pope Francis shows compassion to the sick and medical staff

Pope Francis is concerned on the sick, the elders, and the disabled as he paid a visit to St. Louis Hospital to give a blessing and to encourage the sick and disabled who came to see him. On this occasion, Pope Francis also gave an address to the medical staff of 4 Catholic hospitals in Thailand as well.

On November 21, 2019 at 11.15, His Holiness Pope Francis arrived by car from Wat Ratchabophit Maha Siraram at St. Louis Hospital on Sathorn Road, Bangkok. Once arrived, His Holiness boarded his Popemobile that slowly drove pass the crowd of general public and students from St. Louis College who lined up on both sides of the street. On this occasion, Pope Francis also met with the disabled and elderly who had come so early just to catch a glimpse of him. The popemobile drove around the hospital site to give a chance for the public to see him closely.

Director Professor Dr. Thanin Inthornkamtornchai’s address state that everyone is so happy that he came and allowed the medical staff as well as the sick and the disabled to have an audience with him. On this occasion, Pope Francis was given a book called “Siamese French Dictionary” or Dictionnaire Siamois Francais Anglasis that was first printed in 1896 which was during the Reign of King Rama V. At that time, Bishop Jean-Louis Vey was the Titular Bishop of Gazala and also the 15th vicar apostolic of Mission to Siam. He was also the founder of St. Louis Hospital. The book was edited from “Sapa Pacjana Pasa Thai” of Bishop Pallegoix, 14th vicar apostolic of Mission to Siam as an official souvenir to Pope Francis. This book is a heritage of language and history that shown the determination and dedication of the missionaries in evangelizing Thai people. Later, Pope Francis gave an address to those present. After he had finished, President of the Management Committee Father Surachai Chumsriphanand gave an image of the Blessed Virgin Mary and the Child Jesus as a souvenir from St. Louis Hospital to the Holy Father. Afterwards, Pope Francis took an official photo with the management committee of St. Louis Hospital.

Pope Francis came back down to the first floor of “Roi Pi Barameeboon” Building to visit, bless and encourage the 40 patients who came to see him. They had terminal illness or at the end of their treatment. Pope Francis shook hand with all of them and blessed them as well as their caretakers.

St. Louis Hospital is the first Catholic hospital in Thailand which was built in 1868 during the reign of King Chulachomklaochaoyuhua by Bishop Jean-Louis Vey, the 14th vicar apostolic of Mission to Siam. The hospital was given to Sisters of St. Paul de Chatre to take care and extended to a training center for nursing assistant and then St. Louis College in 1985. On the occasion that Pope John Paul II visited Thailand (he was elevated to sainthood by Pope Francis on May 27, 2014 at St. Peter’s Basilica, Rome) also came to Saint Louis Hospital on May 11, 1984.

Aside from Saint Louis Hospital, Thailand also has other Catholic hospitals such as San Camillo in Banphong district, Ratchaburi province which is the first hospital for the Carmelite Order in Thailand. They were given permission and official opened as a hospital in 1953. Camelite hospital in Wattana district, Bangkok was also opened in 1956 and Saint Mary Hospital in Nakorn Ratchasrima province was opened by a French missionary, Father Marius Brey in 1958.

After Pope Francis had visited the patients, he ascended the popemobile one more time to head toward the Apostolic Nunciature Embassy of the Holy See to Thailand where he will lunch and rest. 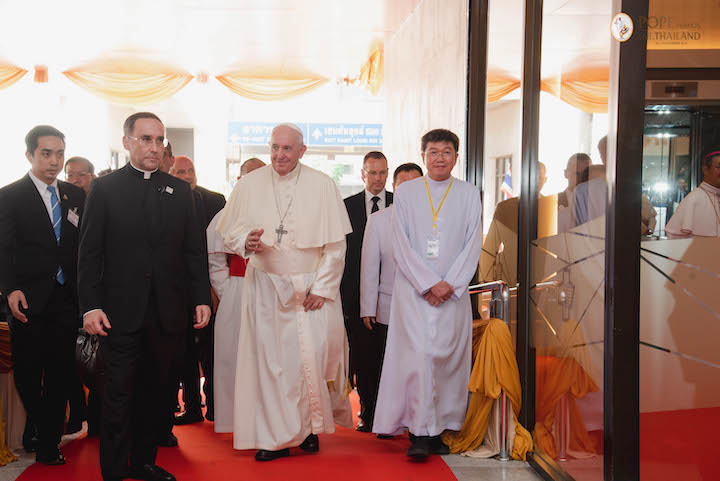