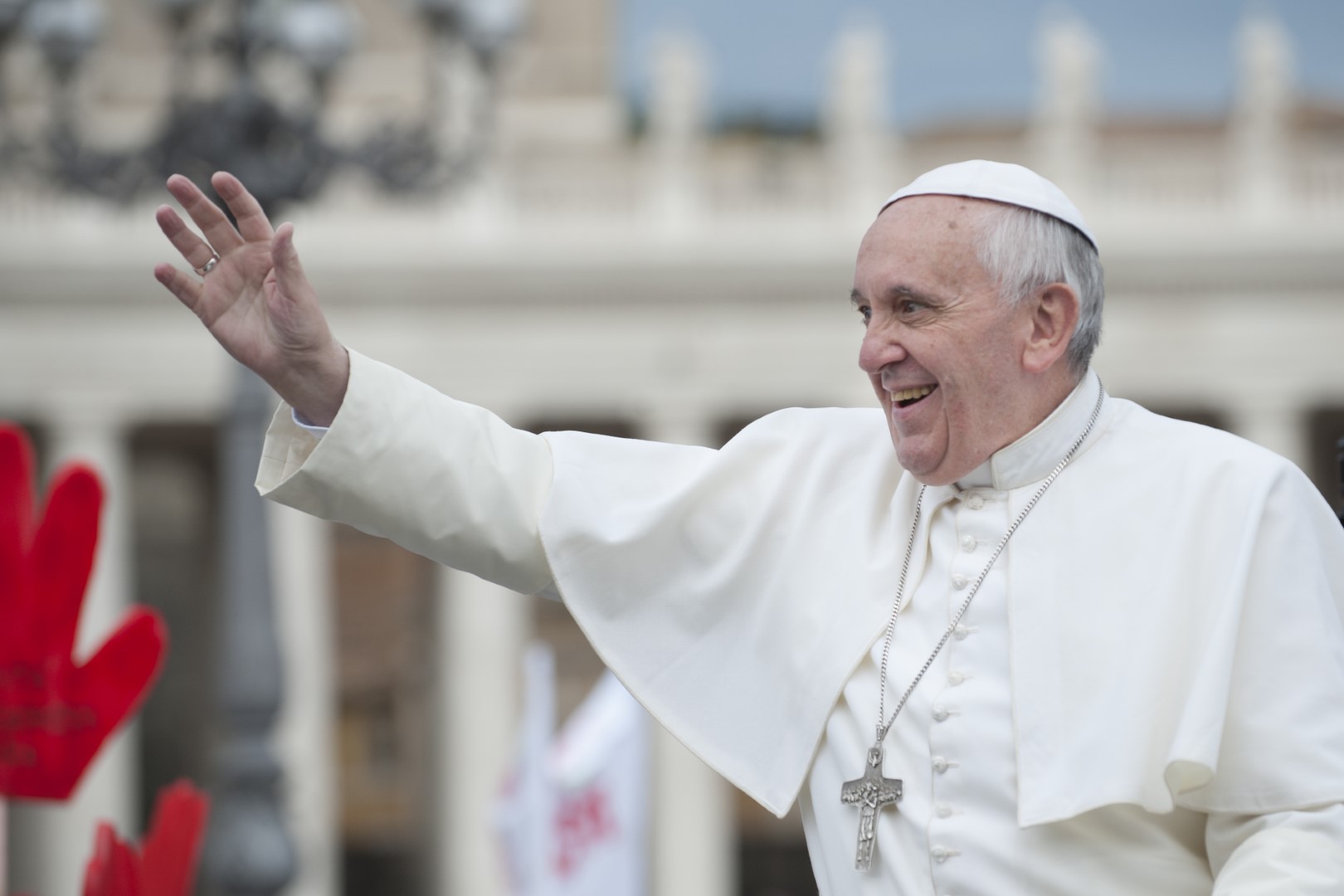 Jorge Mario Bergoglio was born on Dec. 17, 1936, in Buenos Aires, Argentina, to Italian immigrants, Mario Jose Bergoglio and Regina Maria Sivori. He was the eldest of five children. After graduating from high school, he worked as a chemical technician, but he soon realized his true calling of the priesthood.

When he was 21, he suffered a severe lung infection that led to the removal of part of his right lung.

He graduated from technical school as a chemical technician before training at the Diocesan Seminary of Villa Devoto. In 1958, he entered the novitiate of the Society of Jesus.

He studied theology at the Colegio Maximo de San José and completed his doctoral thesis in theology in Freiburg, Germany.

He was ordained a Catholic priest on Dec. 13, 1969, and began serving as Jesuit provincial of Argentina in 1973. In 1980, he returned to his alma mater, the Colegio Maximo de San José, where he served as rector and a professor of theology until 1986.

In 1992, he was appointed titular bishop of Auca and auxiliary of Buenos Aires.

In 1998, he became archbishop of Buenos Aires and three years later he was elevated to cardinal by Pope St. John Paul II.

In 2005, he was appointed president of the Bishops’ Conference of Argentina, which he served until 2011.

In 2013, after Pope Emeritus Benedict XVI resigned, Jorge Mario Bergoglio was elected the new leader of the Catholic Church.

On March 13, 2013, Catholics around the world heard the Habemus Papam (“We have a pope”) announcement as Jorge Mario Bergoglio became the 266th pope of the Roman Catholic Church. With that, he made history by becoming the first person from the Americas, the first non-European and the first Jesuit priest to be named pope. He chose the name “Francis” after St. Francis of Assisi.

Addressing the crowds in St. Peter’s Square after the conclave, the new pope asked for their prayers: “And now I would like to give the blessing, but first I want to ask you a favor. Before the bishop blesses the people, I ask that you would pray to the Lord to bless me — the prayer of the people for their bishop. Let us say this prayer — your prayer for me — in silence …” The tone of his papacy was set.

From the start, Pope Francis has won admirers all over the globe. The stories of his humility were quickly picked up, while his lifestyle broke traditions that had been upheld by his predecessors for more than a century — from his choice of residence and where he chooses to eat to even his choice of transport.

His work of reform

Upon his elevation to the papacy, Pope Francis became not only the head of the Vatican City State, but also the head of the Holy See, which oversees more than 1.3 billion Catholics across the globe. This puts the pope in a unique position as both a temporal, as well as a spiritual leader with a global reach.

Like many of his predecessors, Pope Francis has used this position to effect positive changes in the world, especially in situations that may have faced deadlock for a considerable time. A key example of this policy in action was the restoration of ties between the United States and Cuba. These two countries had been locked in conflict throughout the Cold War, as well as during the post-Cold War period, having severed diplomatic relations in 1961. Pope Francis, along with the Canadian government, was a key player in behind-the-scenes negotiations that eventually led to the restoration of diplomatic ties in 2014. Such successful diplomacy has been attributed to the confidence that both sides had in the pope as a spiritual leader.

The pope is not only concerned with high politics and diplomacy, however. Those that are often the most overlooked in society have also received his attention. As Europe experienced its worst refugee crisis since World War II, Pope Francis provided a strong voice advocating for the rights of the most vulnerable in society and calling for European governments to act decisively to prevent further tragedies. Indeed, the pope’s first official visit outside Rome in June 2013 was to the island of Lampedusa, which was at the frontline of the refugee crisis. The papal visit served to call further public attention to the magnitude and tragedy of the crisis.

In accordance with the policies of his predecessors, Pope Francis is not only concerned with the issue of Christian unity, but also of promoting interreligious dialogue. As archbishop of Buenos Aires, Pope Francis already had close contacts with the Jewish community in Argentina. Ties with Judaism were furthered by a papal visit to Israel in 2014, where the pope urged for more dialogue between the Israelis and Palestinians for the cause of peace.

Pope Francis has also enhanced interactions with Islam. Notably, in February 2019, he became the first pontiff to visit the Arabian Peninsula when he took part in an interreligious conference in the United Arab Emirates. There, the pope along with the grand imam of al-Azhar, Ahmed el-Tayeb, also signed the Document on Human Fraternity for World Peace.

Although the pope’s public interaction with Buddhism so far has been limited to a visit to Sri Lanka in January 2015, especially in contrast with Judaism and Islam, it is hoped that the upcoming visit to Thailand will give a boost to the Catholic Church’s dialogue with Buddhists. Indeed, the historic Thai tradition of interreligious tolerance may provide an example of how different elements in society can come together to create a harmonious whole.

The upcoming papal visit to Thailand, the pope is coming as a pilgrim of peace. Not only is he promoting inter-religious dialogue he is arriving during the 350th anniversary of the establishment of the Mission of Siam.

When Pope Francis chose the papal name of “Francis” after St. Francis of Assisi, he did not only have the example of the saint’s humility, poverty, and quest for peace. St. Francis was also known for his close connection with nature. Famous anecdotes of the saint have him preaching to birds and persuading a wolf to stop attacking a village, in exchange for food from the villagers.

Following in the footsteps of St. Francis, the pope has made environmentalism one of the key messages of his papacy. The importance of this issue was highlighted in the papal encyclical Laudato si’, issued in June 2015. In the encyclical, the pope lamented the symptoms of the ongoing environmental crisis including pollution, climate change, loss of biodiversity, and the general destruction of the environment. Besides supporting mainstream solutions, such as the increased use of renewable energies, the pope went further by calling for the curtailing of unbridled consumerism and irresponsible development, which are the root causes of environmental and, by implication, human degradation. In June 2019, the Holy See was the third country to declare a climate emergency, following in the wake of Great Britain and Ireland.

As Thais are becoming more conscious of the effects of consumerism on the environment in the light of high-profile cases, such as the death of Mariam the dugong, the pope’s visit will further highlight the importance of environmental awareness, as well as concrete and spiritual actions to halt further environmental deterioration in this economically dynamic and fast developing country.

Subsequent to his papal election, reports in the media have suggested that Pope Francis also considered choosing “John” as his papal name in honor of Pope St. John XXIII, who famously convened the Second Vatican Council, urging its participants to “Throw open the windows of the Church and let the fresh air of the Spirit blow through.” Although Pope St. John XXIII did not live to see its outcome, the Second Vatican Council ultimately shaped the modern face of the Church.

Similar to his predecessor, Pope Francis has embarked on a series of reforms within the Church, some of which will have profound effects long after this papal reign ends. One such example is the reform of the Institute for the Works of Religion, known colloquially in the media as the “Vatican Bank.” Long mired with allegations of corruption, among the first measures Pope Francis took upon his elevation was the creation of a special Pontifical Commission to study reforms in June 2013. The commission returned with recommendations to increase transparency and compliance with external standards, including external auditors and the publication of publicly available annual financial reports. These recommendations have subsequently been implemented and the institute’s reputation has since been considerably rehabilitated among international financial institutions.

A more painful subject for the Church are measures dealing with allegations, as well as proven incidents, of sexual abuse. Pope Francis created the Pontifical Commission for the Protection of Minors in March 2014, which was explicitly designed to prevent cover-ups of cases. Alongside publicly admitting the previous failures of the Church in this area, the pope also sought advice from a wider circle by convening the Meeting on the Protection of Minors in the Church in February 2019, which discussed measures to enhance the Church’s responsibility, accountability, and transparency in this area, as well as recommend priorities for further action. The effects of the implementation of the recommendations remain unknown for now, but the pope has clearly sent a message of zero tolerance, as well as a sincere desire at the highest level for greater transparency in the Church’s handling of this sensitive and ongoing issue.

Nevertheless, as the Church is one of the oldest international institutions in the world, there are bound to be differences in opinions as to what aspects of the Church should be reformed and what should be left alone. While Pope Francis has made unprecedented public statements calling for more compassion and understanding for groups such as homosexuals and divorced members of the Church, and more significant roles for women, concrete reforms in these areas are yet to emerge. It is clear that much more debate and discussions will need to take place before reforms, if any, in these areas will emerge. Yet, there are clearly signs that the wind is blowing in the Church, where it blows will perhaps be up to its members to decide.